The Foundation of the Club

Our branch was founded in 1932 only 3 years after the Pony Club itself was formed.

The first District Commissioner, and the man who provided the impetus for the formation of the branch was Colonel Guy Cubbitt who was DC from 1932-1940. At this point the club was disbanded for the duration of the war.

The club still holds all the minutes of meetings from these early years as well as correspondence between Colonel Cubitt and his Chief Instructor “Girlie”.  In one letter from Colonel Cubitt to Girlie, Colonel Cubitt recommends using The Manual of Horsemastership, Equitation and Animal Transport as a reference guide. This was the military equivalent of the Pony Club Manual, and indeed formed the basis of the first Pony Club Manual.

Many of the organizers and instructors from the club’s early history were military personnel and learnt their horse craft and their discipline and organizational skills during their commissions.

The club has had the following District Commissioners;

We are hugely lucky in our branch to have had some incredibly successful equestrians; due hopefully in some part to the training they received as they started out in the Pony Club.

Some of our most notable members include Tony Grantham  (father of Carolyn Gorman) who was a pre-war member and became a leading National Hunt jockey and won the Cheltenham Gold Cup on Gay Donald.  He was principal jockey for Queen Elizabeth the Queen Mother and won many big races for her.

In the world of eventing Tina Gifford (now Cook) has won 3 Olympic medals and 2 European Championships.  We are very lucky to have Tina as a regular speaker at camp and the children love to wear her silver medal from London 2012!

Our teams have been placed second three times in the Open Eventing at the PC Championships.

In Show Jumping the current young star Georgia Tame started her career in our Branch.

We have also produced some very successful polo players including Jack and Ralph Richardson, Lanto Sheridan and Matthew Pannell.

Harry Bentley is currently one of the country’s top flat jockeys and Roily Owers, Head of World Horse Welfare, also started his riding career in our Branch.

I have to end this brief history by mentioning our Club Secretary Angela Ellis, who has not only been with the Club for 70 years, but was also National Ladies Point-to-Point champion many moons ago – so many that she would not tell me how long ago it was.

It is our hope that the club will continue to produce such keen, dedicated and successful riders well into the future.

The two pictures in the slider at the top of this page feature Angela Ellis and her sister Tessa Covell in 1939,  and the second features our team from the Pony Club Team Championships Open Eventing at Cheltenham Racecourse in 1966.  This team was made up of Steven Kelly,  Diana Friar,  Sarah Jeanes (who became DC) and Tessa Martin-Bird. They came 4th.  As our new website demonstrates our current children are as successful as their predecessors and we look forward to reporting many more team and individual successes. 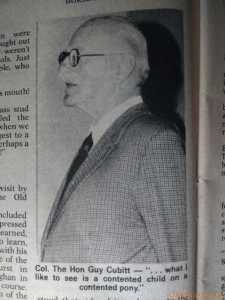 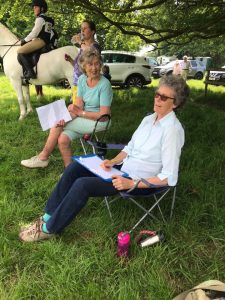